For his birthday, Rowan wants a shiny new fire truck he’s been admiring in the toy shop window.  In “A Fire Truck Named RED” (FSG, May 2016), he instead receives a worn truck that belonged to his grandfather.  He is disappointed and close to tears, but remains gracious when his grandad says, “We’ll fix up Red better than new.”  Rowan is skeptical.  His grandfather begins to share all the exciting adventures he had with the fire truck when he was a boy, and Rowan gets swept up with the stories.  His grandfather spruces up the fire truck, and Rowan realizes “We could be a great team.”  RED is an endearing tale with many universal themes including memories, imagination, and bonding with a grandparent.

Transportation lovers will have fun with a new ABC book, “ABCs on Wheels” (S&S, July 5, 2016). Retro illustrations fill the pages beginning with “A is for axle” and ending with “Z is for zoom.”  There are taxis, tractors, race cars and even a space rover.  Wheels of every shape and form are celebrated in this enjoyable brand new book.

In another wonderful new book, “The Airport Book” (Roaring Brook Press, May 2016), a family of four has their trip described in vivid detail.  It begins with hailing a taxi, arriving at the busy airport, and then standing in many lines — for tickets, checking luggage, and security.  The family then waits to board.  There is so much going on.  The story follows them on their flight, to arriving, and then waiting at the baggage claim.  A secondary story involves the little sisters sock monkey getting lost, but the reader can follow the stuffed animal at the bottom of the page as it takes a different journey to their destination.  Full of details, this delightful book will fascinate all kids traveling by airplane. 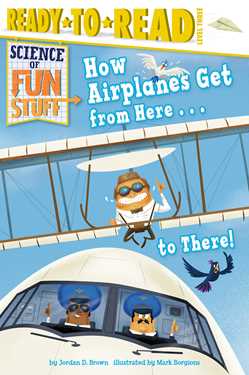 In a new book for older kids (ages 5 & up) who can read, or understand a comprehensive text, there is “How Airplanes Get from Here… to There!” (S&S, May 2016).  This is a Ready-to-Read ($3.99), Level 3 non-fiction book from the series “Science of Fun Stuff.”  This book includes chapters on the Wright Brothers, contemporary facts on flying, security, how a pilot steers and much more.  It contains fun facts in the back, and how to make a paper airplane.  This is a terrific non-fiction series with many other titles available for your curious reader.